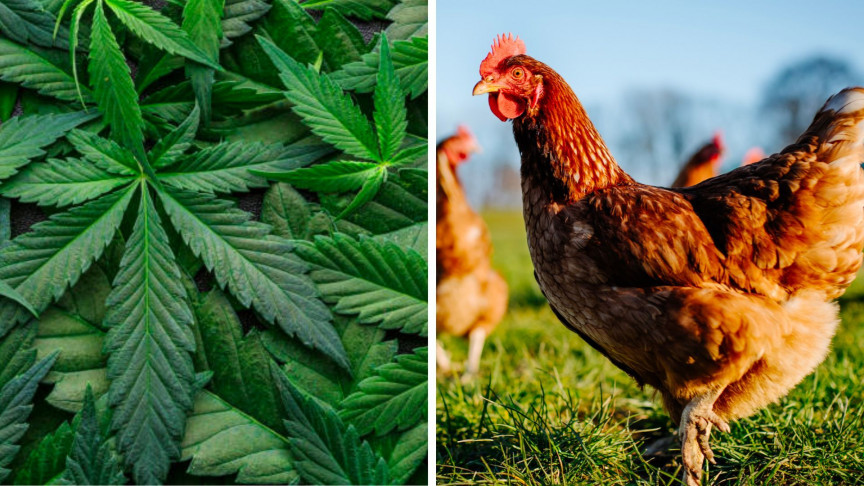 Some Thai People Are Feeding Chickens Cannabis by Emily Jiannetto

Since Thailand has recently decriminalized cannabis, its uses have been expanding among the population. One of the most interesting is feeding chickens cannabis. Ong-ard Panyachatiraksa, a farmer in Northern Thailand who also happens to be licensed to grow medical marijuana, began to feed his chickens the leftovers from his marijuana plants (Ratcliffe). Researchers at Chiang Mai University have studied 1,000 chickens at the Panyachatiraksa farm that were fed a marijuana and feed (or water) mix since January 2021 (Ratcliffe).

The results were “promising” (Ratcliffe), showing a potential to use less antibiotics in livestock farming. The chickens were not given an amount of cannabis significant enough to get them intoxicated, nor did their meat or eggs have any trace of cannabinoids (Ratcliffe). In fact, the chickens that consumed cannabis, yielded higher quality meat and the chickens had less bronchitis infections (Ratcliffe). The researchers theorized that cannabis “stimulated” the immune system of the birds, but they don’t have any solid answers as to why cannabis improved the health of the chickens (Ratcliffe). However, cannabis prices in Thailand are simply too high for it to be a realistic alternative to cheaper antibiotics, but in the next few years, with better research and cannibis reforms, it may become a viable alternative.